How does mascara work?

Many women apply mascara to their eyes every day, but how much do we know about the product or the little black wands that make our eyelashes look longer?

HomeThe science of cosmeticsHow Does Make-Up Work?How does mascara work? 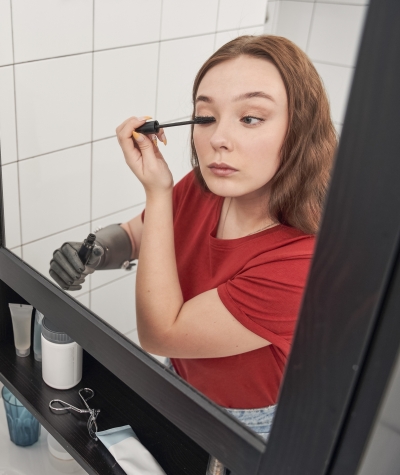 Mascaras are pigmented preparations for application to the eyelashes to make them look darker and longer and to make the whites of the eyes look brighter by contrast. Old-style mascara was applied from a cake, using a wetted brush, but this practice was not entirely hygienic and has almost disappeared. Modern mascaras are a smooth viscous cream. Some contain fibres to produce an apparent lengthening of the lashes.

The basic ingredients are:

Brush technology has played an important role in the innovation of mascaras. The introduction of the moulded brush has opened up new avenues. Previously traditional brushes were used that consisted of trimmed fibres twisted on to a metal applicator. The design options are now limitless as the moulded technology itself has improved, allowing different widths of bristles - from superfine to sculpted shapes - and plastics of varying firmness to be used, each one delivering different lash effects when applied. However, mascaras and their performance are totally reliant on finding the optimum combination of brush applicator with the correct formula. A great formula with one style of brush may produce totally different results with another design of brush. A thinner texture might not hold on the brush and vice versa, a thicker consistency might not give the same payoff as it is trapped in a tighter network of bristles.

The wand itself, position of the bristles, shape of the applicator, 'reservoirs' on the brush and many other design features, are all analysed and tested in combination with different formulas to meet with the objectives of the product, whether lash lengthening, building, defining or sculpting. This is often a long process as the options for combinations are broad and varied.