Do cosmetics have microplastics in them?

HomeSustainable cosmetics and the environmentDo cosmetics have microplastics in them? 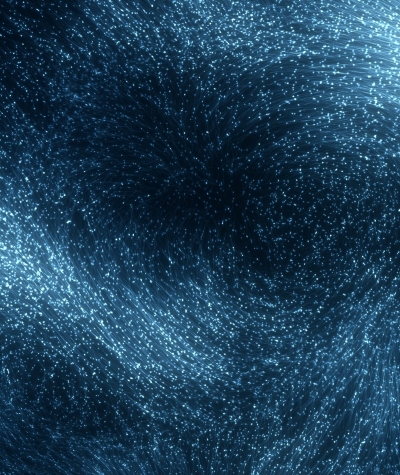 Plastic waste has no place in the environment and so just as any responsible industry would, CTPA and the UK cosmetics industry shares the widespread concerns about the serious issue of plastic pollution in our environment.

Therefore, in 2015, the cosmetics industry across Europe voluntarily began the removal of plastic microbeads from rinse-off products, where these ingredients could potentially reach the marine environment.

When the definition of a microplastic is expanded to include any solid, man-made polymer rather than true plastics, this impacts essential ingredients in cosmetic products which have not been shown to pose a risk to the environment. A ban on these ingredients will have no impact on the serious issue of plastic pollution, and will result in consumers finding that their choice of products, and the benefits that these products provide, will be greatly reduced.

Plastic microbeads, which used to be used in some cosmetic products, were a very small fraction of the wider class of 'microplastics'. Plastic microbeads were present in some rinse-off cosmetics for their cleansing and exfoliating properties, but these have been voluntarily phased-out across Europe and also have now been banned in several countries, including the UK.

There is no standard globally-accepted definition of plastic or microplastic, which does make it challenging for countries to implement laws which are aligned with each other, and also for scientists when comparing research data to build up our scientific knowledge on microplastics.

Where do microplastics come from? 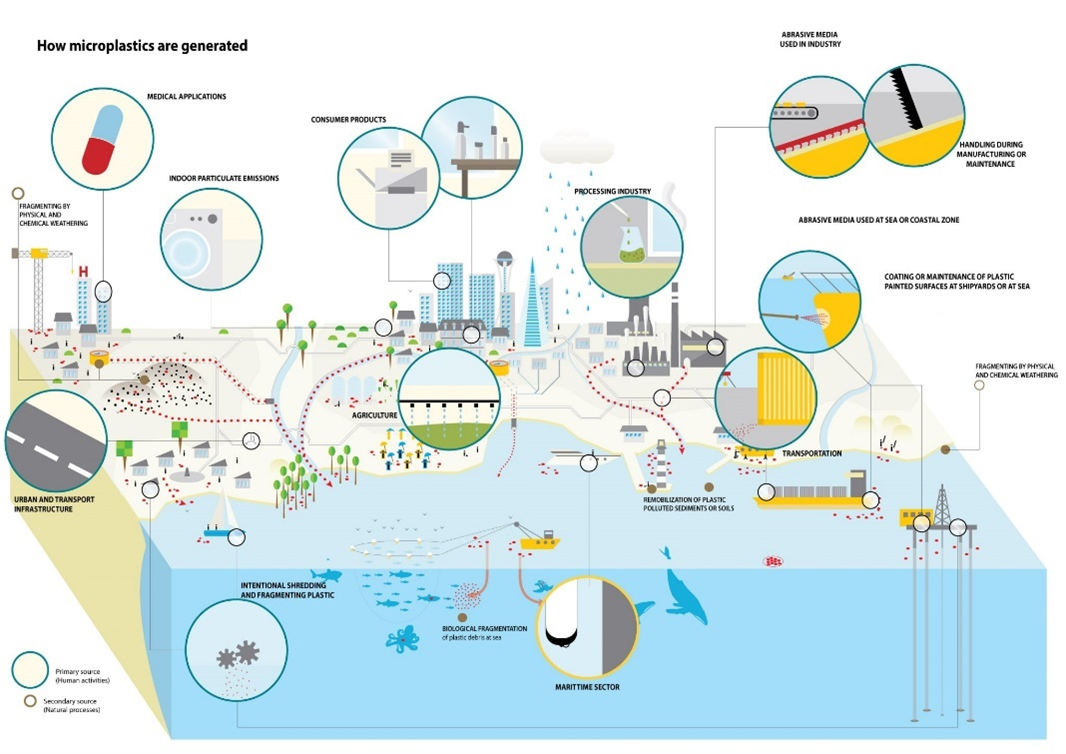 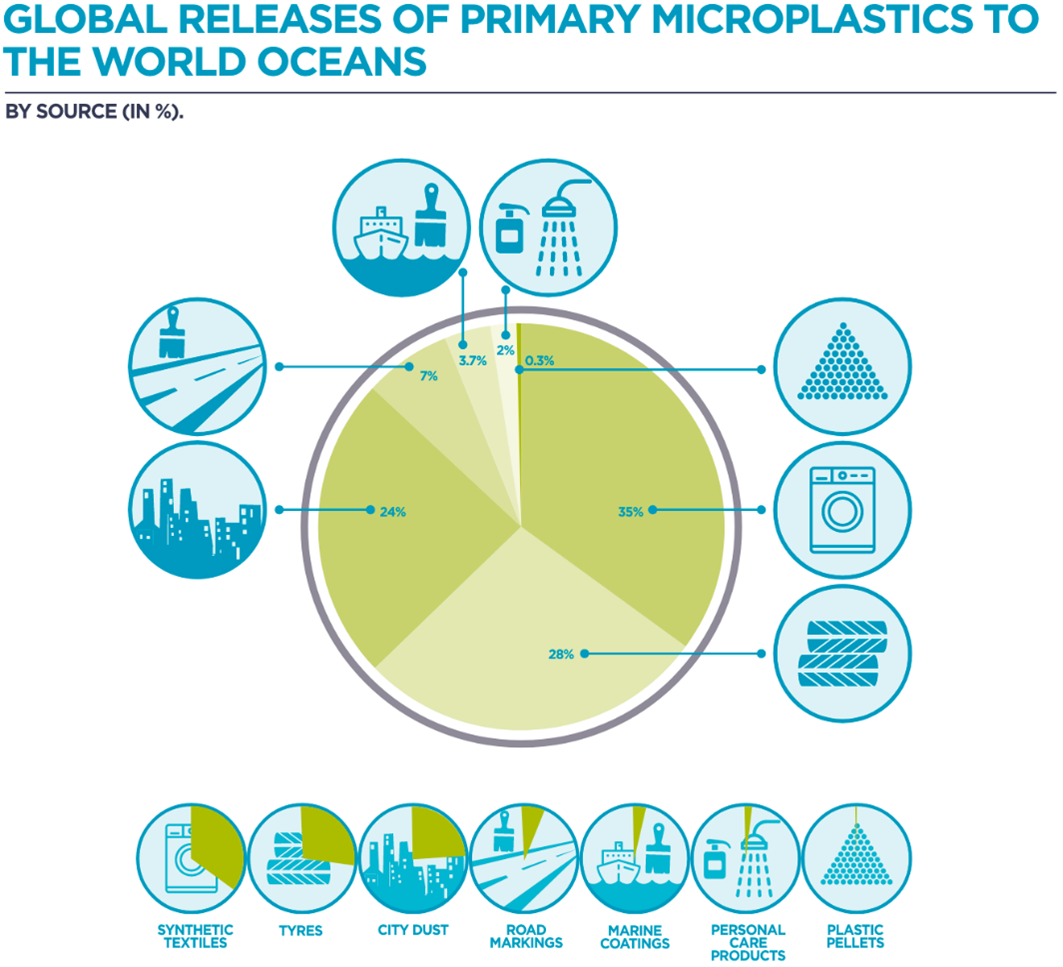 IUCN Primary Microplastics in the Ocean 2017

Plastic microbeads are any intentionally added, water insoluble, solid plastic particles (5 mm or less in size). They were used to exfoliate or cleanse in rinse-off personal care products and they have been voluntarily phased-out across Europe and also have now been banned in several countries, including the UK.

Plastic microbeads were used in some cosmetic and personal care products to help clean the skin by exfoliation and to remove stains and plaque from teeth. Exfoliation removes dirt and helps to unclog pores. Dead skin cells are loosened and removed to leave a surface layer composed of fresh, younger cells. This leaves the skin feeling soft, smooth and looking brighter.

The small plastic beads were originally selected for use as exfoliating or teeth-cleaning agents because they are clean, safe, can be produced to be a uniform size and have no sharp edges to scratch the skin.

It is possible to tell whether a product contains microbeads because they give a grainy appearance and texture to the product. It will not necessarily be possible to determine whether the microbeads are made from plastic or naturally derived material just by looking at, or feeling, the product. Companies that previously used plastic microbeads have replaced these with alternatives, including beeswax, rice bran wax, jojoba waxes, starches derived from corn, tapioca and carnauba, seaweed, silica and clay.

Are other types of microplastics used in cosmetics?

The fact that there is no standard globally-accepted definition of plastic or microplastic means that the same ingredient might be considered a microplastic under one law, but not under another law. Ultimately, what matters is whether this ingredient has an impact on the environment.

The definition of microplastic proposed by the European Chemicals Agency (ECHA) for its REACH Restriction on microplastics defines a microplastic as any solid synthetic polymer. This definition is very broad and includes many substances, such as polymers with essential uses in cosmetic and personal care products, which are not associated with the plastic pollution problem. These ingredients have not been found to pose a risk of harm to health or the environment.

What impact will ECHA's REACH Restriction have on cosmetic products? 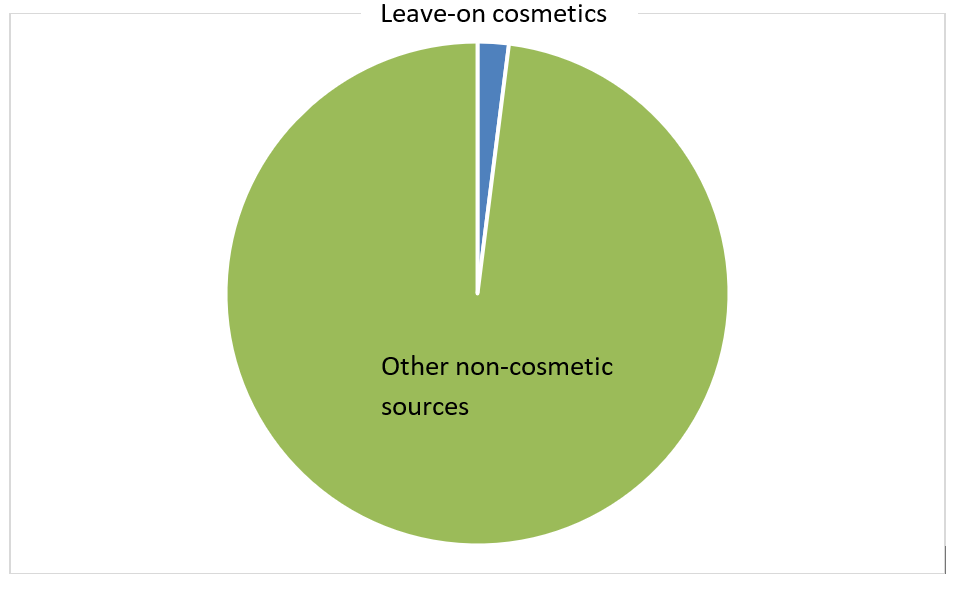 In the context of the total amount of 'plastic' waste, ECHA estimates that leave-on cosmetic products contribute 0.004%. This is the equivalent of four seats out of the entire capacity of Wembley Stadium.

Despite this, the REAH Restriction will mean cosmetic products across many different categories, from sunscreen to mascara to toothpaste and shower gel, will need to be redesigned. As no alternative ingredients are available in 85% of cases, we are likely to notice a difference in the way our cosmetics look, feel and work, or even that some are no longer available.

What are plastics and polymers?

A polymer is a substance made up of a repeating sequence of one or more types of units, or monomers, which are bonded together to form a chainlike structure.

Polymers can have different properties depending upon the type of monomer unit, the number of monomers in the polymer, how the monomers fit together and whether the monomers have any additional chemical groups. They can be elastic, durable, flexible, hard, soft, solid or liquid.

Polymers are essential for our survival; for example, DNA, starch and protein are all found in the human body.

Polymers can be found in nature, such as mushrooms and shellfish.

There is an enormous variety of man-made polymers; from clingfilm, to dental resins to fix teeth, to novel lightweight aeroplane parts which make aeroplanes more lightweight and more energy efficient.

A plastic is a type of polymer. Plastics are defined as synthetic, water-insoluble polymers that are repeatedly moulded, extruded or physically manipulated into various solid forms which retain their defined shapes in their intended applications during their use and disposal.

However, as can be seen from the examples above, a plastic is a type of polymer, but not all polymers are plastic.

Essentially, plastics are man-made materials which are made from a wide range of organic polymers that can be moulded into a specific shape while soft, and then set into a rigid or slightly elastic form. The properties of a plastic can be affected by the number of single units in the polymer structure (known as monomers) and how they fit together.

What are polymers used for in cosmetics?

Owing to the range of properties a polymer can bring to a product, polymers have a wide use in cosmetic products.

It is impossible to determine from the name of a polymer on the ingredients list whether it is natural, synthetic, liquid, solid, soft or hard. For example, two different cosmetic products might show the same ingredient (INCI) name on each product label, but in one product the ingredient is a liquid and in the other product it is a soft wax.

The word 'poly' in an ingredient list does not mean that the ingredient is a plastic.

Just as they are essential in many other parts of life, polymers play an essential role in most cosmetic products.

Without polymers, we wouldn't have the smooth, durable surface of a nail polish.

Polymers are used to improve the efficiency of UV filters in sunscreen. They also help the product spread across the skin and make it water resistant.

Without polymers, makeup such as foundation and mascara would feel heavy and greasy. Coverage would be patchy and would wear off quickly.

Polymers attach to damaged areas of the hair fibre, helping to repair it. Hair looks shiny and feels smooth and conditioned.

It is easy to tell from using and feeling the texture of these products that the polymers they contain are not solid plastic.

A common example of a plastic is polyethylene. Polyethylene is used in products ranging from bulletproof vests and artificial joints for knee and hip replacements to milk jugs, packaging film and bubble wrap.

Solid plastic microbeads were often made from polyethylene. However, there are many other cosmetic ingredients with names related to 'polyethylene' which are not solid plastic.

Many such ingredients are actually present as liquids to help products spread smoothly and evenly on the skin. Just because a cosmetic product contains the word 'polyethylene' in the ingredients list on-pack does not mean that the product contains microbeads of plastic which are associated with the environmental concern. 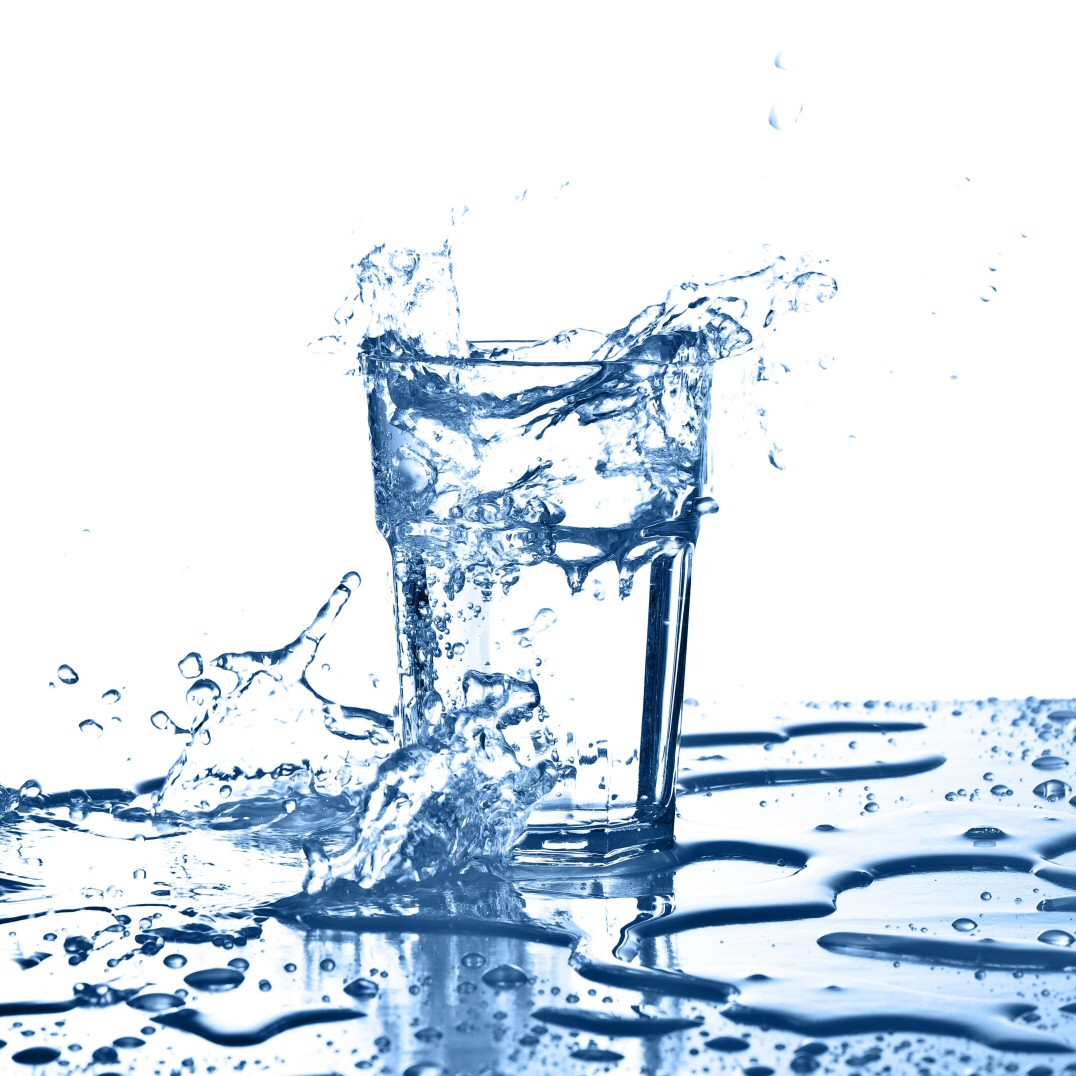 For example, polyethylene glycol is made from the monomer ethylene glycol and is usually a liquid or a soft, waxy substance. The properties of polyethylene glycol vary depending on exactly how the substance is made, resulting in a wide range of potential functions. Ingredients based on polyethylene glycol are used in a variety of products from pharmaceuticals to cosmetics and food. In cosmetic products their functions range from surfactants to emollients in many different product types including skin creams, eye shadows, foundations, deodorants and hair conditioners.

If a polyethylene glycol-based ingredient is used in a cosmetic product, the word 'polyethylene' will be seen in the ingredients list on-pack. However, it is important to stress that this does not mean that the product contains plastic microbeads.

What action has the cosmetics industry taken on plastic microbeads?

As an environmentally responsible industry, the UK cosmetics industry acted voluntarily to remove plastic microbeads from products as part of a Europe-wide initiative launched in October 2015.

The recommendation from Cosmetics Europe, the European Personal Care Association, was to discontinue, by 2020, the use of synthetic, solid, plastic particles (plastic microbeads) used for exfoliating and cleansing, that are non-biodegradable in the aquatic environment; this was despite the extremely small role plastic microbeads play in the total microplastic litter.

This recommendation built on voluntary initiatives already taken by individual member companies of Cosmetics Europe. As a result, the vast majority of UK cosmetics manufacturers were already well on the way to removing plastic microbeads completely from products before legislation came into force in the UK in 2018. This legislation banned plastic microbeads in rinse-off cosmetic and personal care products from mid-June 2018.

What is glitter made from?

Glitter is often used for visual effects in cosmetic products. Such glitter effects are achieved in a number of ways.

Some glitter is made by fixing colours between thin layers of plastic. These glitters would be classed as a plastic. If these types of glitters are used in rinse-off cosmetic products they will be covered by the UK ban on plastic microbeads.

However not all substances that provide a glittery effect are based on plastic. Some glittering effects are provided by coloured mica, which is a naturally mined mineral. Other glitters are minerals based on silica (a constituent of sand) mixed or coated with colours.